As River City has been going through the whole story of Biblical redemptive history we have seen God’s unfolding plan to create a worshipping people who will live in God’s place under God’s gracious rule. It’s a huge understatement to say that currently this is not happening in the Middle East. Recently I read the story of a man who has been on both sides of the conflict: the violent and the peaceful. Here is a review of his two books…

The transformation of a life changed by Christ is 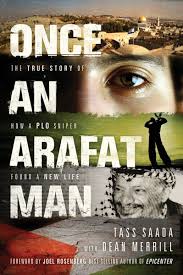 nothing short of miraculous. This is especially true for Tass Saada. He grew up hating Jews in Saudi Arabia and then Qatar. His hatred and thirst for revenge took him to holy war in Syria under the well-know terrorist leader Yassar Arafat. However, God had other plans for Tass and brought him to America where he found a wife, a job, and (most importantly) love for a Jew named Jesus Christ. Once An Arafat Man is an amazing story that would have been hard for me to believe if I hadn’t meet Tass Saada in person. His autobiography is easy-to-read and fast paced. I highly recommend it to anyone who has an interest in the conflicts in the Middle East, especially to those who are Muslim.

While Tass’s first book is geared toward those with a Muslim background (because that’s his story), his follow-up book, The Mind of Terror, was written with the Christian believer in mind. With his background as a terrorist,

and as an American citizen who was born in the Middle East and who now lives in the West Bank, Tass is probably one of the best people in the world who can help educate us on how a terrorist thinks. If you had to choose just one of his books to read, then choose Once An Arafat Man, but after you read it you will want to read The Mind Of Terror.

One extra thing that I took away from his two books that I wasn’t expecting was his views toward current tension in The Promised Land. I have come to embrace his view that both Jews and Muslims should live peacefully with one another in the land. And that this will only happen as hearts and lives are changed by the gospel of Jesus Christ.